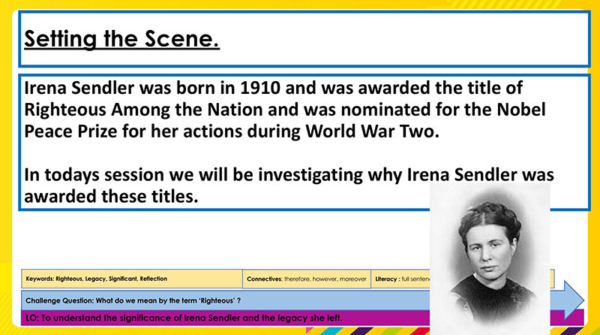 The 27th of January marks the anniversary of the liberation of Auschwitz-Birkenau, the largest Nazi death camp. This year the theme for Holocaust Memorial Day is: ‘Be the light in the darkness‘.

Holocaust Memorial Day 2021: ‘Be the light in the darkness’

Here at TEMA we are commemorating this by focusing on the life and sacrifices of Irena Sendler. We have focussed on putting survivors and victims at the heart of our HMD sessions, ensuring that students are learning about the people behind the statistics and restoring their identity.

Irena Sendler who was born in 1910, was awarded the title of ‘Righteous Among the Nation’ and was nominated for the Nobel Peace Prize for her actions during World War Two. Students have been investigating why Irena Sendler was awarded these titles. To commemorate the Holocaust Memorial Day students will create a display made of luggage tags which will convey a message of remembrance or reflection.

HMD is for everyone. Each year across the UK, thousands of people come together to learn more about the past and take action to create a safer future. We know they learn more, empathise more and do more.
Holocaust Memorial Day Trust